My First Affiliate Checks and How It All Started! While I was cleaning up my office, I came across a few copies of some of my first affiliate checks I earned online over twenty years ago! It’s funny when I think back to how you got started, because everything was so different, yet the same. Affiliate marketing was just starting out… companies were taking a chance at a new form of advertising and most didn’t know what to expect. Imagine if the Amazon.com Associates Program had never exist… would affiliate marketing still be as big as it is today?

C’mon everyone, hop into the delorean…  and let’s step into the affiliate time machine and go all the way back to 1997!

Back in the 90s… Domains Cost $70!
Before finally spending the big bucks to get my own domain, I spent years on free web hosting sites like Geocities, tripod and mostly through my free AOL accounts. Who didn’t have 20 or 30 free AOL disks sitting around… so I went for a very long time without having to pay for internet access. Getting my own domain several years later was one of the biggest events yet to hit my business, not to mention… one of my first big expenses!

Back in the 90s… CJ was Personable!
Sure, Commission Junction is now one of the largest affiliate networks out there… if still not the largest! However, years before ValueClick even thought about buying them, I was an affiliate and merchant on their network for years. Along with your monthly check, you also received a printed letter from CJ and their President Lex Sisney… and YES!, he actually did sign off on each of these original letters. 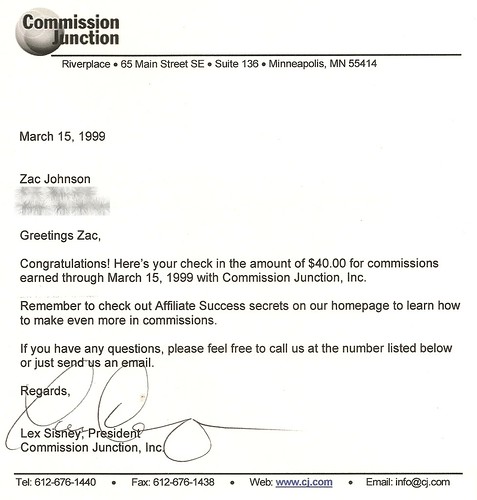 Back in the 90s… Checks were smaller, but meant so much more!
No matter what sites you visit today, it’s not hard to come across their affiliate program. Back in the 90s they were far and few… and many companies weren’t even online yet! One of the first companies I worked with was a hosting company called eAds, and they were the equivalent to what ValueClick Media and CasaleMedia are today. They had a small network of banner advertisers that you could place on your website and you would be paid a specific amount per click.

One of the most lucrative companies I worked was a hosting company called AdGrafix. What was really great about their affiliate program was that they offered residual income on any new web hosting clients you sent them. I used to go into the AOL chat rooms and find people that wanted to get a website for themselves or their companies. I was around 15 or 16 when I started pushing the web hosting programs and they continually made me residual income for years. Affiliate programs now as days just pay a large affiliate commission per signup, to avoid paying nice residuals and keep it for themselves.

Back in the 90s… Amazon was King!
Not only was Amazon.com one of the largest and fastest growing sites online, they were also one of the first affiliate programs available. Here is one of my earlier checks from Amazon.com. During the first few years of their associate’s program, you could earn 5-15% on sales, depending if they were books or movies (since that is all they sold at the time). Using FrontPage97 I created hundreds of celebrity pages with Amazon.com book/movie listings to generate sales. The high-quality content from the sites ranked very well in the search engines, bringing in new traffic and sales. Still, at this point, I hadn’t spent any advertising dollars to promote my sites… but I was still able to send Amazon.com a couple hundred thousand dollars in sales.

As my online shopping sites became more popular, so did affiliate marketing. I added new advertisements to the site and found I was starting to make more money from getting signups to CPA offers, then pushing sales for Amazon. I gradually moved everything over to a CPA perspective for affiliate marketing and my main focus.

Back in the 90s… it was all coming together!
Everyone has to make a start somewhere. Below is one of my first financial reports and as you can see, payments from AdGrafix hosting revenue was one of my biggest money makers. Seeing this type of revenue, while just starting high school, only fueled the fire to excel and make the most out of what I had started. It was only a matter of time before everyone else started to get into the game and more affiliate marketing opportunities became available. 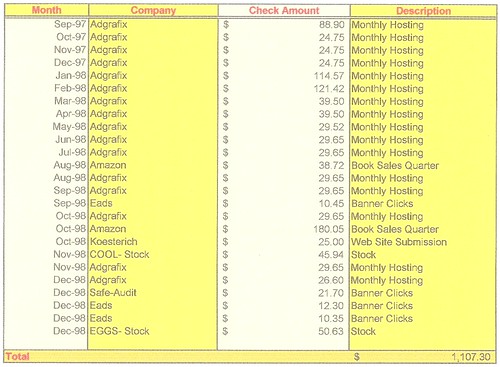 Back in the 90s… The Almighty Banner Started it All!
But what really started it all?… it was “The Almighty Banner Ad“. Before affiliate marketing, before affiliate networks, mailing lists, and blogging… there were always banners, and even more importantly, the AOL Web Diner. The Web Diner was a chat room on AOL where webmasters and designers could talk about what’s happening on the internet. Long story short, I made my first dollars online by designing 468×60 banners for people to promote their website. There was no Paypal at the time, so I would receive actual dollar bills in the mail… well, most of time (imagine that, people ripping a 15-year-old kid off!) Nonetheless, the experience was amazing and even in it’s the smallest form (of $1.00), it showed the true potential of the internet and what was to come!

Looking Back, 20+ Years Later…
It’s amazing to look back and see how everything started. I still have my original computers that I worked endless nights on, cranking out new web pages and absorbing as much information as I could. I should load them up again and see what other old school goodies I can find. It’s been an amazing journey, and it’s still just in the beginning phases… I’m still so excited for what the future holds and the fire is still burning to excel that much more!

When did you make your first dollars online and what stories do you have from yesteryear?

44 Replies to “My First Affiliate Checks and How It All Started!”