Say Hello to My Little Friend

A little over a month ago, Jim Kukral wrote a post on how Dwight Schrute (from The Office) has his own bobble head, and why can’t he? Even Jim Cramer has his own bobble head! In the post, Jim also mentioned a new company called WhoopAssEnterprizes, which specializes in the creation of custom bobble heads. Right after I saw the post and their web site, I knew I had to order a bobble head of my own. 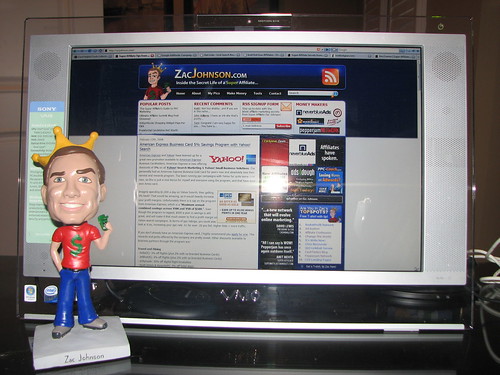 WAE has a decent site, and when you fill out the order form, you can go into quite some detail on how you want your bobble head created, along with uploading multiple photos of what you look like. I told WAE, that I wanted the bobble head to look more like the ZacJohnson.com blog toon, than anything else. Here were the first draft sets of images they sent, in the creation of Mini-Zac.

After receiving the the draft pictures, WAE asks if there are any changes you would like made to the design. I approved their design right away, anxiously awaiting their next set of pictures. A few days had passed and I finally received an email with my completed bobble head.

If you’d like to have your own bobble head or mascot on your desk, I’d recommend going with WAE. The price on a custom bobble head is $125, but they’re worth it. Not only did they provide a quality product, but they will keep working with the designs until you are satisfied.

21 Replies to “Say Hello to My Little Friend”