HTML clipboardOne of the reasons why I wanted to attend IzeaFest was because Loren Feldman (of 1938Media.com) was on the speaker list. While Loren may not be well known by everyone, he does seem to get noticed by many of the big name players on the internet, including Michael Arrington, Jason Calacanis and his favorite person in the world to make fun of, Scoble! 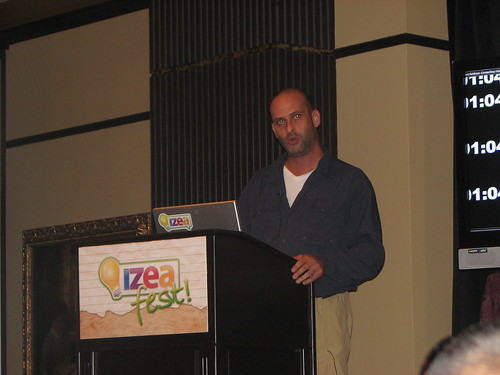 Instead of focusing and specializing in traditional text blog posts, Loren Feldman has become well known for his video work. Video is a hard enough of a skill to accomplish, but Loren makes it look easy. In addition to his onslaught of crazy, funny and controversial videos, Loren also has his own entourage of puppets to keep him busy.

A few things Loren talked about at IzeaFest were that video is tough and it can even hurt your name or company brand if you do it wrong. Anyone who gets into video, needs to talk directly to their viewers.

Content Controversy is KING
Loren Feldman has made quite the name for himself by attacking and pointing out bigger names in the industryâ€¦ and quite often using humor in the process. His controversial videos were usually his best and most seen.

Everyone Loves a Good Laugh
Before all of the internet and video success came to Feldman, he was a comedian in Hollywood. Once it was time for Loren to focus his efforts on his blog at 1938Media.com, he brought in a few friendsâ€¦ some of you may know them as Shel or even Salaam E. Baloney! (and the rest of his puppeteer gang).

The key points from Loren’s sessions at IzeaFest were the following:

-Â Â Â  Don’t care what other people are saying about you. The moment you start listening to the critics, is the moment you start to fail.
-Â Â Â  Loren really doesn’t make much money from his personal blog at 1938Media.com, but instead does commercial video work for outside companies.
-Â Â Â  Loren also talked about the importance of video over text or written letters. His example was a company changing over healthcare plans and how a video from the CEO would comfort the employees that much more, over a mass template email to every employee.

Head over to 1938Media.com to see what’s on Loren Feldman’s mind todayâ€¦