Everyone already knows how awesome it is to work at Google. When I visited their headquarters there were bike racks, people running around and jogging, a volleyball area and much more. If you are ever in California and wanting to visit Google Headquarters, make sure you talk with someone at the company first, before visiting. I didn’t want to just show up at their offices out of the blue, so I sent in a feedback form through Google Adwords admin area asking about visiting their offices and if any tours or anything were available, and I received the following response.

While I was in San Francisco, CA for EliteRetreat, I already had my flight and hotel booked for a set amount of time. Once I heard that Google Headquarters was only about an hour away, I wanted to see what I could do about extedning my stay and visiting their headquarters. Instead of heading home Monday (as planned), I extended my hotel stay another night ($289), transferred my flight for a day later ($100 transfer fee per ticket) and rented a car to drive over to their offices ($100). I didnâ€™t mind the additional costs of around $600 for the chance to visit Google, after all Iâ€™ve worked heavily with them over the years and always read about how great their company headquarters is.

Once Reena and I arrived at Google, we went to the visitor center and asked if they have any tours of if we could roam around and check out the location. The somewhat lifeless soul behind the desk said, â€œNo, we are a closed campus. We don’t allow anything like that.â€. I then asked if I could take a picture in front of their big Google sign in the visitor centerâ€¦ again she replied, â€œNo, we donâ€™t allow pictures hereâ€.

Very frustrated and confused, I called Google Adwords support over the phone to see what the heck was going on. I was connected with someone at Google Adwords and went through the scenario with them and explained I was currently at their offices in California and was denied access. The representative I was talking to on the phone was located in the Boston Google offices, so she could not help. I also told her about the email from Google, telling me to visit their offices. She then put me on hold for a bit and back tracked that email response to Google support in India! (So basically the representative in India had no idea what she was saying). Lastly, she looked up my Adwords specialist linked to my account, and they had the day offâ€¦ though I am sure that wouldnâ€™t have changed anything anyway.

Before leaving Google, we decided to go to the main lobby and see if they could offer any light to the situation. Once again, almost as a lifeless soul, they answered with the same response. I noticed with both secretaries, once you stopped talking directly to the (and still standing at the desk), they would just go back to work and just ignore your existenceâ€¦ it was very odd, and disappointing. Even after I explained to them both I had done well over six figures with the company through Google Adsense and spent thousands upon thousands through Google Adwords, the response was still the same. 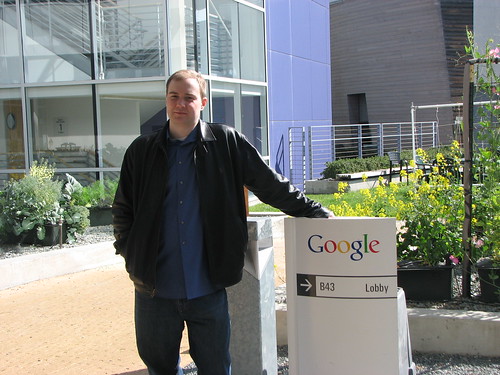 My “less than thrilled” picture at Google Headquarters.

In the end, we left Google with a sour taste in our mouths. Iâ€™ve heard about how people have had to sign disclaimers on how they canâ€™t release any information when the visit the campus, but I wasnâ€™t expecting such a cold response from everyone there, but mostly how badly I was miss informed by their Adwords support. If you are ever planning on visiting the Google Headquarters, make sure you have something in writing that is on staff that day, otherwise you might as well just be their competition.